Kane Waselenchuk, the #1 player on the International Racquetball Tour (IRT), continued his journey to another tournament title with a win over Mario Mercado, 11-3, 11-5, 11-2, in the quarterfinals of the Atlanta Pro-Am in Lilburn, Georgia. Waselenchuk will play Alejandro Landa in the semi-finals, as Landa outlasted Alvaro Beltran, 11-9, 11-0, 6-11, 9-11, 15-13, in what was a very long match. The fifth game alone was over 30 min.

Bredenbeck played 14 games over 3 matches in singles, as well as a tie-breaker in his doubles match last night.

In the other quarter, Rocky Carson defeated Felipe Camacho in three straight games, 11-3, 11-7, 11-4. Carson and Franco will play in the other semi-final.

Make your plans to attend the 2020 United Healthcare US Open October 7-11 in Minneapolis, Minnesota! 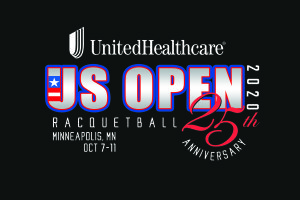