Some of our women working promoting and playing racquetball break all of the molds. This week we are publishing a bio and a Hall of Fame recommendation rather than our normal Q&A.

This info below the videos was curated and prepared by Linda Mojer.

You may have seen Malia Bailey on YouTube or on MonkeySee.com, with her racquetball intro series. It was my first introduction to her. 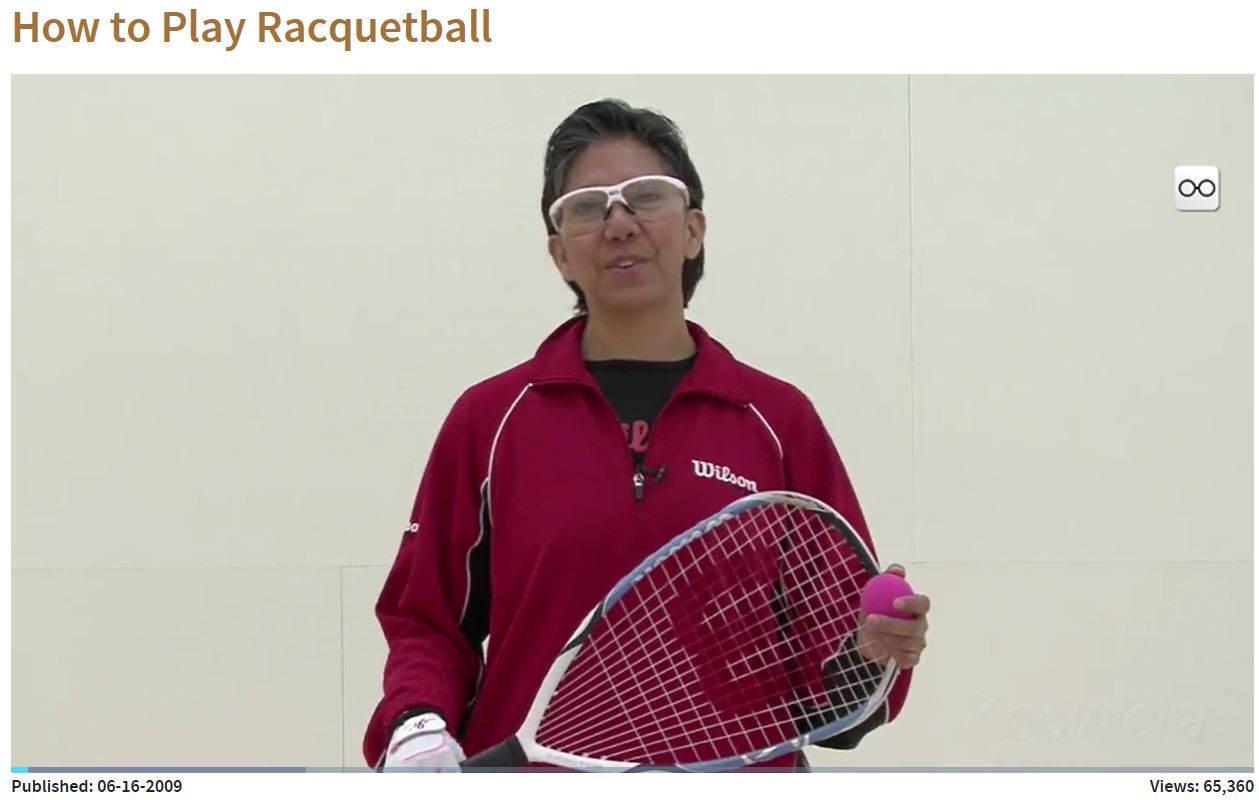 In amateur competition alone, Malia Bailey is credited with capturing 63 national and international gold medals – in open, age, singles and doubles competition. Another 26 silver medal finishes round out an impressive resume that spans almost four decades. She qualified for the U.S. National Team on multiple occasions, and represented the national governing bodies of the American Amateur Racquetball Association [AARA] and U.S. Racquetball Association [USRA] in numerous international competitions.

Over the course of a remarkable 36-year career, she’s partnered with four current Hall of Famers, helping to build the winning records that earned their own inductions. She is incredibly skilled and her consistent ability, performance and expertise led to success in partnerships with Jerry Hilecher, Jimmy Lowe, Jackie Paraiso and Debra Tisinger-Moore.

Career: In 1983, Malia Kamahoahoa partnered with Carol Frenck to earn her first Women’s Open AARA National Doubles Championship title. That qualifying win began a 12-year stint of service to the U.S. National Team, in which she represented both her country as an athlete and her teammates as a National Board member with advisory responsibilities to the US Olympic Committee. During that term, she competed in 16 International Racquetball Federation and USOC events across the globe.
In just the current decade, she’s added 14 more titles to her record since 2010, with double and triple-gold medals earned at seven National Doubles Championships. Throughout the decades prior, similar results documented an unmatched ability.

Professional: In 1991, Malia ended the Women’s Professional Racquetball Association (WPRA) season with its No.3 overall ranking, and went on to capture two Pro singles tour wins to reach the No.2 spot the following year. She made sporadic tour appearances through 1998, while routinely qualifying for – and competing on – the U.S. National Team in both singles and doubles.

Inspiration: Malia was diagnosed and treated for breast cancer in 2004, yet her record doesn’t reflect the slightest speed bump. She took Doubles wins in each of the five years preceding the diagnosis, then returned even stronger to log another 7-year string of uninterrupted titles afterward. Before, during and after her recovery she inspired everyone around her, as a fighter on the court and survivor off.

Legacy: Not only did Malia craft a stellar career for herself, she and husband Jim have passed along their lifelong passion for the sport to their daughter Kelani. Coached by her Mom, Kelani qualified for the U.S. Team for reaching the final of the 2018 National Singles Championships, and now carries on a proud family tradition “in uniform.”

And … while achieving all of her on-court success, Malia was working diligently on the sport’s behalf in boardrooms, as a clinician and goodwill ambassador, a state association volunteer spanning decades, a coach and athlete advisor, and as a local club program promoter and professional instructor. She could easily be inducted as a contributor.

And … Malia was fully qualified for HOF induction in the mid-90s, but she could not be considered at the time since she was actively seated on the USRA Board of Directors. Rather than abandon that role to serve her own interest, she graciously agreed to have her nomination shelved and continue her important governance work at the national level. That her credentials have not been re-submitted until now is a glaring oversight.

Malia Bailey has won a Gold medal in elite competition in 28 of the 36 years since her first win was recorded in 1983.