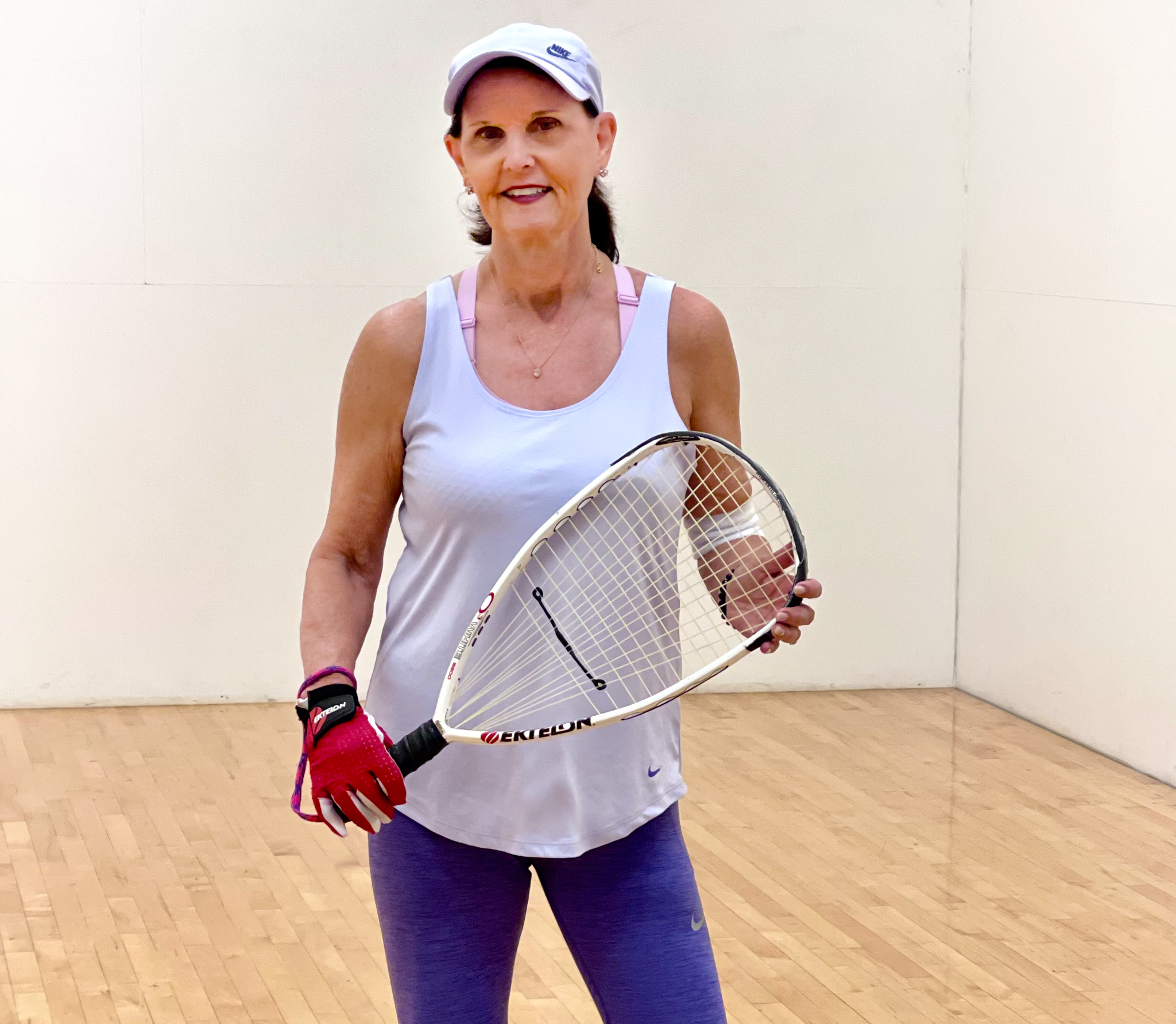 Are you a pro player, coach, association board member, tournament organizer, or racquetball broadcaster AKA why do racquetball players know you?
I’ve been playing racquetball for 38 years now and been on the Florida Racquetball Association Board for 19 years: 1 year as an “at large” member, 2 years as Referee Certification and 16 years as Treasurer. As Treasurer, I handle all tax, semi-annual accountant reporting, Annual Reports, handling of all monies from our events and USAR Rebates and Final Tournament Reports to the Board. Most people probably know me though from just playing in lots and lots and lots of tournaments over all of those years. I’ve been lucky enough to connect with so many cool people with so many cool stories through racquetball.

Where do you promote racquetball on social media and the web?
Personal Facebook page: https://www.facebook.com/karen.bouchard.1954
Instagram: https://www.instagram.com/karenbouchard/

Did you play as a junior?
Oh, I only wish that I’d played as a junior. I didn’t pick up a racquet until after I’d had my first child and was 27 years old.
When I was pregnant, a new “Racquetball Club” opened up in Clearwater, Florida and every single one of my friends joined. My best friend at the time hounded me for a whole year before I took her up on it and I was literally hooked from that day until today. I guess I always had a competitive vibe in me all along because I couldn’t wait to get good enough to beat my best friend’s butt.

First female mentor or idol in racquetball:
Well, my best friend got me into the game but my first “idol(s)” were Mary Lyons and Susan Pfahler. I would see them play at virtually every tournament here in Florida. Neither of them had any idea who I was but I loved watching them play (Singles and Doubles). They were both such unbelievably talented players (I mean, my God … they had their NAMES on the back of their shirts back in the day!!) and had so much fun off the court as well. Little did I know that they would both become some of my BFF’s in and out of racquetball. When I really think about it though, I have so many “idols” from my racquetball circle: There’s Renee Fish, who was the person who talked me into playing in my very first tournament ever and was my doubles partner for many years. There’s Janet Tyler, who is not only an exemplary racquetball player, another past doubles partner, tough competitor, but also a great friend. There’s Tom Bevelock (his sister, Toni, played on the Pro Tour in the 80’s & 90’s), who was my Mixed Doubles partner for 20 years and is one of the best friends I ever had in the sport. There’s Meena Evans, who I played with at two National Doubles tournaments and took 1st and 2nd place with and is still so special to me. There’s Jean Trimble, who has done more for racquetball in Florida than most people can imagine and is a great friend of mine.
As much as I admire and love to watch the Pro’s —- and I do! —- I guess my “idols” are friends that I’ve known and learned from over the past 40 years of playing.

Motivation for the game (what keeps you playing):
1.) Friends, for sure.
2.) It helps to keep me from being too fat. I love to eat. A lot.
3.) Bottom line is, it’s the most fun sport that I’ve ever played. Nothing else can really compare.

Love most about racquetball:
It’s a great workout without feeling like a workout.

Preferred equipment:
Ektelon. They sponsored me for about 20 years and I still love their racquets and gloves. I also use a lot of E-Force gloves.

Favorite event:
My favorite event of recent years is the National Senior/Masters Tournament. The tournament staff always works so hard to put on a great event. They’ve added Doubles, which makes it more inclusive for those players who aren’t playing singles anymore. Of course, any tournament here in Florida is fun … our Board, the Florida Racquetball Association, has a great group of volunteers who work super hard at putting on our events. John Scargle and I used to run the Florida Regional Doubles Tournament every year, back when there were about 180 players on average in attendance and that was always a blast. My bucket list event is the US Open .. maybe this year!

Best results at tournaments you’ve played in:
I’ve played in so many tournaments and was never good about keeping records or logging them down. I surely won a fair amount of events but most of my most memorable times seem to have happened when I took 2nd place for some reason. I’ll never forget when Tom Bevelock and I took second place at National Doubles in Jacksonville, Florida and beat LYNNE ADAMS and Rich Clay in the semi’s! I was a nervous wreck going onto the court against the legendary Lynne Adams, of course, and somehow we managed to win. After our win, Lynne was such an unbelievably great sport and was so complimentary of Tom that I thought those two were going to go out and have drinks together! I’ll never forget just how NICE she was… still makes me smile. Another great 2nd place finish was at the National Senior/Masters Tournament when I beat Mary Lyons in the semi’s (the only time that I ever beat her, BTW) and lost to Linda Moore in the finals (two other talented players that I admire immensely). I will never forget that win against Mary though: not because I actually beat her but because she called an “avoidable hinder” on herself in the tie-breaker and I won 11-10. She stood firm that it was the right call and that she would’ve been ashamed of herself if she hadn’t made it: priceless. Afterwards, I got the honor of playing Linda in the Finals: I’d never heard of her before and thought it would be an easy win (who is this girl???) She pretty much dismantled me, if I remember correctly and I learned a quick lesson! Then of course, taking 1st and 2nd at National Doubles with Meena Evans was very special. And I won’t even try to remember how many 2nd place finishes I had at State and Regional events to Susan Pfahler … lucky me, she’s exactly my age, lives in my state and I could never dodge her. I truly do have a lot of silver medals from losing to the best!

Family shoutout:
Biggest shout-out to the best husband a racquetball player could ever have! Rick and I have been married for 43 years and he’s STILL supportive of my love for the game — he’s always been my biggest cheerleader. When our kids were little, he used to encourage me to go to every tournament that I wanted (he knew how much happier I would be when I got home “Happy Wife, Happy Life”….and how much easier it would be for him to go on his golf weekends!). I never came home from
a tournament, whether I won or got beat in the first round, that there weren’t flowers and brownies waiting for me on the kitchen counter.

Other sports played in addition to racquetball:
I’m a huge runner and have been for 37 years. I’ve run 10 marathons (5 Disney World, Boston, Washington Marine Corp, New York City, Chicago and Las Vegas) and more 5K’s, 10K’s and 15K’s than I can remember, with a few Half-Marathons thrown in. I’m currently training for the “Florida/Georgia Virtual Half-Marathon” in April of this year.

What can we do to activate more female players?
Other than the obvious things that we do here in Florida (reduced entry fees, round-robin play, trying to schedule women all in one day), offering female give-aways is always noticed. Not sure that would “activate” female players but when we’ve given feminine cut shirts or pink shirts, they’ve been appreciated. 🙂

What is your hope for the future of racquetball?
Like all racquetball players today, I simply hope it doesn’t die! More and more people are turning to Outdoor, especially during the pandemic and more and more people are turning to PickleBall as we get older. Of course, I will always hope that we make it into the Olympics in the future. I still marvel that “Trampolining” is in the Olympics and we aren’t!

How do you feel is the best way to help grow the sport of racquetball?
We have to keep trying to recruit young players onto the courts! That truly is the only way to move forward.

If you could bring one thing back from racquetball past – what would it be and why?
I wish we could bring back true racquetball clubs. We’ve lost most of them here in Florida and L.A. Fitness is the only place that so many of us have to play now. As grateful as we all are to L.A. Fitness for having somewhere to play, they don’t allow tournaments and they don’t allow anyone under the age of 14 to come into the facility. It’s a true challenge for the future of the sport and virtually hog-ties those in areas where that is the only place to play.

What do you do to train?
Run (a lot) and weights in the gym (a little).

What is the biggest challenge you face right now as it comes to racquetball, and how do you work to overcome that challenge?
Time. I have 7 grandchildren who all live within 20 minutes of us and I make them ALL a priority. I also have an 89 year old mother with Alzheimer’s and I’m an only child so she absolutely a big priority for me. There are five and a half million people with Alzheimer’s in the U.S. so I’m far from alone in dealing with the challenges of this horrible disease so I know I’ not alone. What I do is what I’ve always done — I try and make my racquetball a priority as well. I just play in the mornings before I go visit/pick up Mom and while the grandkids are in school. I’ve done alot of runs at 5:00am if that’s what the day dictates.