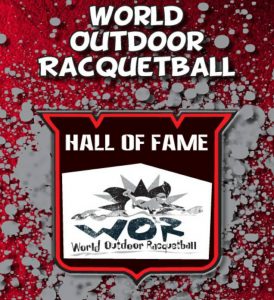 WORHOF is pleased to Announce Greg Solis as a Part of the 2018 Outdoor Hall of Fame:

“The WORHOF is distinguished by its cast of inductees who represent outdoor racquetball while serving as its premier players, founders, contributors or industry partners. It is the rare player who excels at playing every professional division within one national tourney, year after year, while possessing the equilibrium to also organize and run the competition. Greg Solis is that one player who not only had the resilience, but possessed a singular dedication that has spanned multiple generations of players. (Martha McDonald on why she nominated Greg).

While Greg’s playing record stands among the greatest accomplishments in the game, it was his emergence in his early twenties as an outdoor national tournament director who sustained the annual Orange County event in challenging times- that enabled the continuity of the sport until WOR was established. The playing resumes of many WORHOF members would be much thinner, if Greg had not stepped forward as an outstanding tournament director who attracted the best athletes in the world to compete and also the sponsors to support our great game of outdoor racquetball.” (Hall of Famer, Martha McDonald).

“The on-court accomplishments of Greg Solis clearly make him a Hall of Fame player! He has been playing at the pinnacle of the sport for many years, with multiple titles as is well-documented in his resume. In addition to a Hall of Fame career as a player, many people don’t realize his unique contribution as a national director, especially during the early years of the WOR organization. (Vic Leibofsky, Hall of Fame Director, National Beach Bash).

The World Outdoor Racquetball Hall of Fame (WORHOF) Committee is honored to make a very special announcement… Legendary player and director Greg Solis joins Vic Leibofsky as part of the 2018 Hall of Fame.

Mr. Solis is one of outdoor racquetball’s hardest hitting and most feared pro players; he is also one of the sport’s smartest, most respected and talented players. In fact, Greg has numerous achievement such as being the second player ever in outdoor history to win pro doubles with three partners (Brian Hawkes achieved this feat in his career five times). Based on Greg’s dominating 33 semi-finals placements including10 of which were national championship titles, he is clearly one of the most decorated pro doubles player (and outdoor players) ever in racquetball history. The committee wrote, “Greg Solis is a rare combination of an exceptional pro athlete whose playing credentials alone would have secured him a spot into the hall, yet when you combine that drive (and drive serve) with his years of directing many major national tournaments plus his contributions and commitment to grow the sport of racquetball, Greg Solis is clearly in a league of his own. Few great athletes have ever excelled like Greg has while simultaneously directing the WOR National Championships and the WOR Warm ups from 1998 to 2018.”

Greg won the Men’s Pro Doubles National Championships with three different partners (Andy Solis of whom Greg played with from 1995-2002; Craig “Clubber” Lane during the period of 2003-2013, and Kevin Booth winning in 2012. Greg is also the only player in history to win Pro Doubles for men to win three consecutive years from 2004-2006. Along the way, Greg Solis secured six pro men’s doubles outdoor national titles (1998, 1999, 2004, 2005, 2006, 2007 and in 2012) and he was a finalist three other times. Additionally, he captured three pro mixed doubles titles (all with Janel Tisinger) at Huntington Beach (2012, 2014, and 2015) and he capped a final, doubles career win with his impressive, 10th major pro title capturing the pro CPRT National doubles, crown in 2017 with Pat Allen at Huntington Beach. Greg is also one of the few players to have ever earned a lifetime triple crown at this tournament (in pro doubles, pro mixed doubles and CPRT doubles). Greg’s impressive talents served him well indoors too where he won numerous pro open indoor titles and twice in 2005 and 2006, Greg Solis was named a Team USA, Pro National Indoor Alternative team member.

Greg has run the WOR Warm ups for three decades and also directed the WOR Nationals Championships from 1998-2004 in our quest to honor the major, national founders and tournament directors of WOR Championships events.

Hank Marcus, WOR’s founder said,“Greg Solis has been a fixture on the WOR Southern California professional circuit for several decades as its skilled spokesman and often times a nearly unbeatable doubles player. His record speaks for itself and why it’s a special honor to have him join racquetball’s elite.”

Brett Elkins, chairman/co-founder of the WORHOF stated, “Originally, as an indoor player, I watched Greg Solis dominate the Los Angeles and Orange County indoor pro stops for several years and then later watched him dominate outdoor doubles and finally had the privilege of playing in his outdoor tournaments. I have never seen a player this talented who was also such a successful tournament director. Greg is one of the best sports I have seen, a dominating competitor, an ambassador to the sport and a top level tournament director “

Greg’s induction is part of a WOR campaign during the next five years to help celebrate the sports founders; its major tournament directors; and to induct the legendary early stars from the 1960’s-1980s. Public nominations always take precedent over the committee’s own nominations. We look forward to receiving your submissions (at any time) from the past stars from the 1960’s-1980’s by sending a completed resume of achievements to Brett@trafficeducation.net. Nominations are typically voted on in the order received. Please be sure to include the dates, titles (or top 4 major finishes), the name of tournaments and other important documents using the enclosed resume as an example.

Most importantly, please take a moment to celebrate Greg’s accomplishments by reviewing his resume. The induction ceremony will take place “outdoor style” as we stop play at the “World Outdoor Championships” which takes place in Huntington Beach, CA July 12-15, 2018 (in the afternoon around 1 pm on Saturday, July 14). 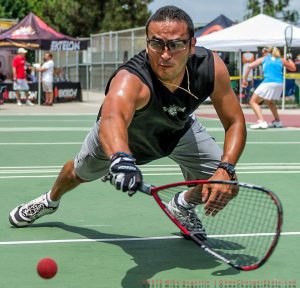 Here is a biography and resume of Greg’s incredible achievements: