In the winter, racquetball courts fill up as outdoor play winds down.  To energize players in these more crowded conditions, doubles tournaments bloom.  Between October and February, states will hold their state doubles championships, regions will hold their regional championships, and the US National Doubles Championship will also be held. The links below are the events with ‘Doubles’ in their title on R2Sports in the USA as of 10/12/2017.

In light of this, I’ve collected some doubles racquetball instruction videos.

Racquetball Warehouse / Ben Croft
Doubles Positioning
Doubles Strategy: Front and Back or Side to Side
Doubles Serves
Doubles Shot Selection 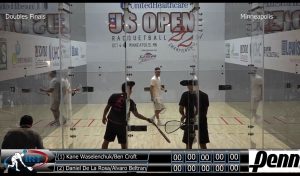 If you don’t have an IRT Network subscription, check out this Men’s Finals match between the USA and Mexico from the International Racquetball Federation’s 2017 Pan Am Championships!