Are you a pro player, coach, association board member, tournament organizer, or racquetball broadcaster AKA why do racquetball players know you?
I have my hands in all sides of the racquetball world. I have primarily been a racquetball player and have recently begun participating in pro divisions. I am also the new WOR Director for Northern California. Since the pandemic, I have taken more of a leadership role in running outdoor tournaments and indoor racquetball leagues. I have coached players, from beginners to intermediate/advanced amateurs, on and off throughout the years.

Did you play as a junior? When & how where you introduced to the competitive side of racquetball?
I believe I hit the ball around first when I was in junior high, but it wasn’t until the summer of 2006, when I was 16 years old, that my dad taught me and my brother how to play racquetball at a club in Anderson, CA. We mainly played cutthroat that summer, but it began my racquetball journey. About a year and a half later, during my freshman year at UC Davis, I looked for P.E. courses on the registration list because I wanted to keep playing sports. To my surprise, there were lots of racquetball options! I participated in the P.E. Racquetball courses the remainder of my four-years at UCD, and I first joined the Racquetball Club there during the Winter Quarter of my third year (about January of 2010). That was the first time I engaged in competitive racquetball and participated in the intercollegiate racquetball tournaments. I won the first place upper level women’s title for each intercollegiate tournament I participated in for four consecutive quarters. I met John Ellis during that time, and he encouraged me to participate in the local shootouts in the area.

First female mentor or idol in racquetball:
Rhonda Rajsich was the first female I looked up to in racquetball. My background was a bit unorthodox, and I was mostly used to male leads in racquetball. I began hearing about Rhonda, and her titles and skills, and it was very inspiring. Moreover, I met her during my first national tournament in Pleasanton, CA in about 2017, and she was very professional, friendly, and encouraging. I loved the fact that she is a USA player and female athlete. I was very blessed and honored to have played alongside her at the 2020 Vegas 3WallBall outdoor racquetball shootout in women’s pro doubles. I will keep pushing myself to be a better racquetball player so I can remain competitive at that level, and I am happy there are women like Rhonda in the sport to inspire and motivate me to keep pursing my passion.

Love most about racquetball: I love playing competitive racquetball the most.

Preferred equipment:
I am sponsored player with Pro Kennex. I love all of their equipment. Currently, I use the 170 Black Ace. I generally use the standard 17 string gauge. The PK Pure 1 gloves have been a favorite of mine for almost a decade, even before I became part of the PK team. The PK Focus eyewear is also my favorite for eyewear, and it has proven itself against full swing racquets and balls to my face, and has protected me from such mishaps on the court. I use all the bags and backpacks PK has issued the past years. I honestly think that PK has high quality, long-lasting equipment, and that is why I continue to use their gear for all my racquetball needs.

For shoes, I love Mizuno indoor volleyball shoes, specifically the Wave Lightning series, for indoor racquetball. I also use Mizuno outdoor shoes for outdoor racquetball. My only issue with Mizuno’s is that they do not come in “wide” so I have to order a half size up, but otherwise, they’re great!

For clothing, I generally love racerback tank tops or crop tops and a skort or bike shorts to wear for racquetball. Three of my favorite brands are Under Armor, Puma, and Nike for my workout outfits.

Favorite event:
This is hard because I participate in as many events as I can. I do love the Stockton local shootouts that John Ellis runs for indoor racquetball, especially the tournament of champions held in December. I also love the Huntington Beach National tournament in July for outdoor racquetball.

Charity close to your heart: Goodwill

Other sports played in addition to racquetball:
I currently weight-train (and have for over 20 years). I also currently play pickleball and intend on participating more in competitive events and tournaments. I snowboard for fun with friends. I played softball for about 6-7 years before racquetball. I participated in track/field for throwing in the discus and shotput events. I have also participated in basketball, volleyball, frisbee golf, running events (half marathons, 10ks, 5ks, etc.), and more. I love being active and will try anything once!

What can we do to activate more female players?
Encourage them. Mix them with male players when there aren’t enough women. Hold events for women – such as tournaments and clinics. Have more women in leadership roles to encourage younger women to participate.

What is your hope for the future of racquetball?
To grow both indoor and racquetball and bring it back to one of the more popular sports. It takes a village, and I believe we can do it if everyone does their part to grow it.

How do you feel is the best way to help grow the sport of racquetball?
We need to grow it on the local levels, in my opinion. Larger events are great, but it won’t help bring in new players. I think starting at local levels with leagues and clinics is a great way to bring in new players – both at the junior and adult levels. Then they will be more ready and willing to participate at the larger events. Racquetball also needs more sports-related coverage – such as through ESPN or local sports media. This would likely require the racquetball leaders to branch out of their inner circles to gain sponsors and/or partnerships for media coverage to broadcast larger events and pro tournaments.

If you could bring one thing back from racquetball past – what would it be and why?
I would love to see more racquetball clubs where local gyms encourage racquetball by building and maintaining many racquetball courts, rather than utilizing the space for newer trends, such as having excessive TRX or spin areas.

What do you do to train?
I weight train, engage in cardio workouts (i.e., elliptical or bike workouts), drill independently, obtain coaching lessons (currently from Coach Jim Winterton), and participate in as much recreational play as I can.

What is the biggest challenge you face right now as it comes to racquetball, and how do you work to overcome that challenge?
I have a hard time finding competitive racquetball games for recreational play and training. I also have an especially hard time finding enough women at my level to compete against. I typically am registered in men’s doubles events as a result. 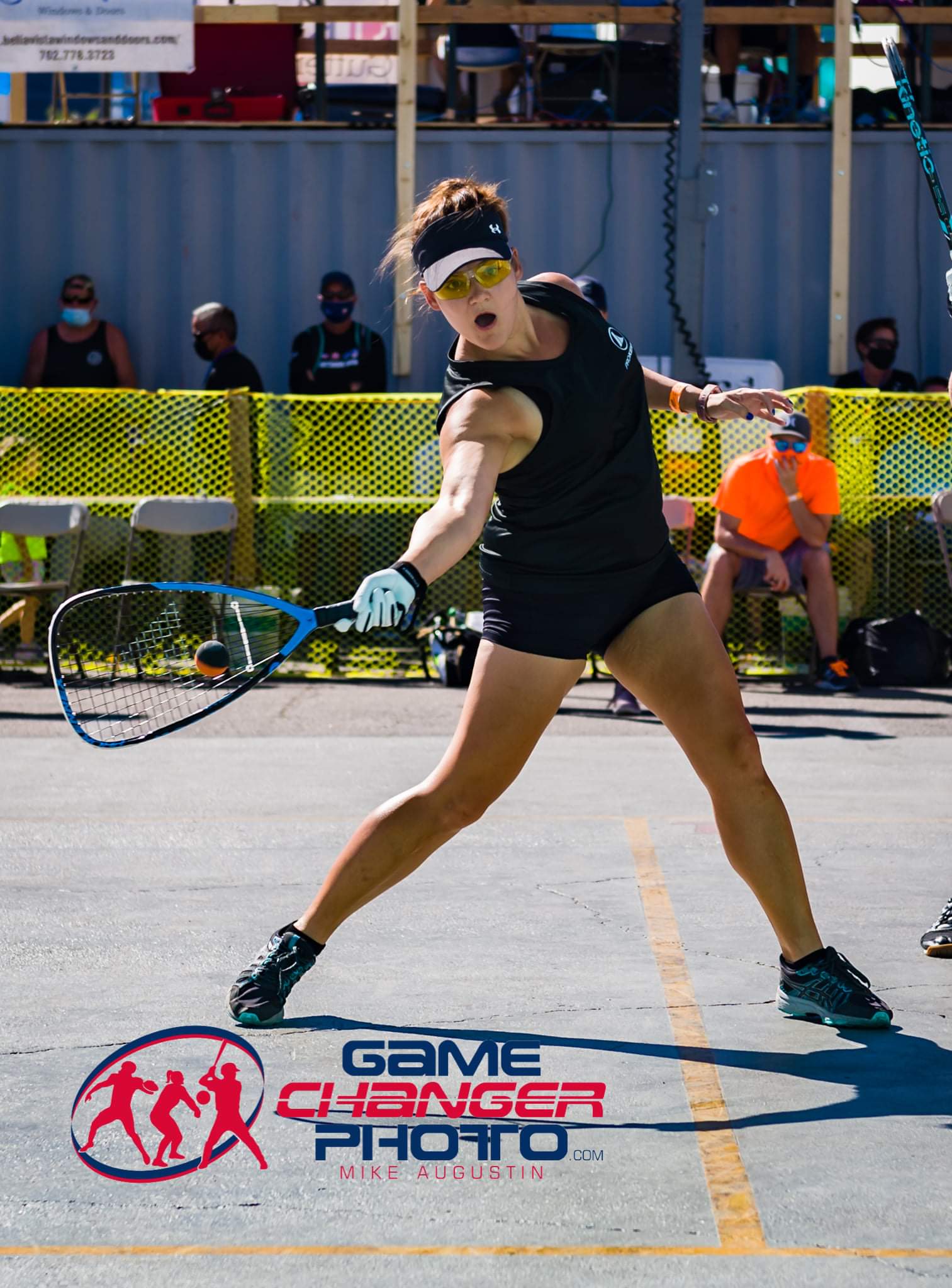